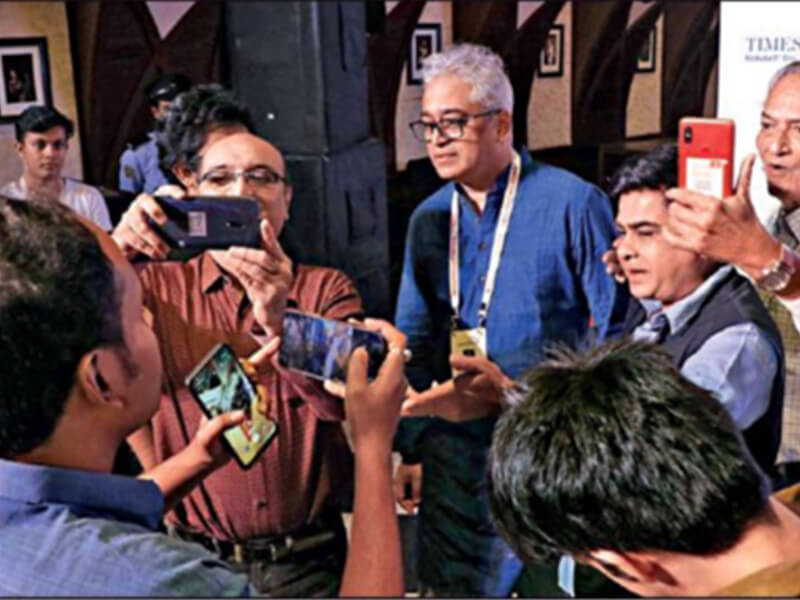 The recent Haryana and Maharashtra assembly elections have reaffirmed the growing dis-junction between the national and state elections, with the opposition finding a more level playing field and distribution of resources (essentially money and organization), but unless the opposition realizes that politics is a 24×7 yearlong game that needs more principled coalitions, the BJP does not really need to worry about the Centre. In a packed session, titled ‘India after 2019: A country in transition’ at the Times Litfest Kolkata at Raajkutir-Swabhumi’s Rang Manch, powered by The Bhawanipur Education Society College and in association with Ambuja Neotia, veteran journalist and author Rajdeep Sardesai, in conversation with senior editor and writer Vaibhav Purandare, reminded the audience that while Prime Minister Narendra Modi could successfully turn the 2019 general elections into a presidential one, he will have competitors in states like Bengal, where a leader like Mamata Banerjee also believes in keeping the remote control of the entire administration only to herself.

“The combination of Modi and home minister Amit Shah has made Indian politics what Indian cricket captain Virat Kohli has done to Indian cricket,” said Sardesai. “Just as Virat has made each player fitter than ever and always competitive, the duo has ensured they afford no space to their political opponents. They are relentless and into politics 24×7. Mayawati and Akhilesh cannot sit in separate rooms before a joint rally and wish to win. A pre-poll alliance partner, the Shiv Sena, cannot talk of a 50-50 CMship after the elections get over.” Calling Modi a “marketing guru”, he said that the win for Modi was made all the more easier when he cornered 95% of the electoral bonds and 75% of media time. “While Rahul Gandhi might not be a very successful politician, I feel sorry that he did not even get into the playing field. The local regional parties corner the rest, leaving the Congress (a poor party with rich individuals) in the lurch,” said Sardesai. He, however, added that Modi did touch on a vote bank that helped his party fetch 5 crore more votes in 2019 compared with 2014 (22 crore and 17 crore respectively). “The BJP is no longer the Banya-Brahman party, having garnered massive votes from the Scheduled Caste and Scheduled Tribes. The women — who benefited from missions like Ujjala and Ayushman — also voted for him, even though some of them might be repacked from the Congress era. Right now, he still commands more trust than others,” he said.

Recalling why he kicked off his new book ‘2019: How Modi Won India’ from the tiff he had at Madison Square in New York in 2014 with several NRIs, he said it was a template followed all through Modi’s first tenure and continues in the second. “He would never take a question. Now if you question him, his supporters who seem him as a supreme leader will question you back. The Indian polity is polarized.” Sardesai lamented that while Modi’s first tenure was all about one Modi, the second is essentially about a Hindu state. “We are in real danger of slipping into a Hindu Pakistan today, when we are celebrating the 150th year of Mahatma Gandhi. When you present citizenship on religious grounds, in a country which houses the third-largest minority population, you can only please Md Ali Jinnah,” he commented.

Sardesai also expressed concern over the Hyderabad encounter. “Justice hurried is justice buried. We need to bring police and judicial reforms. Most importantly, we need good governance. But, today, the autocratic leaders are raising quick slogans and most people are cheering extra-judicial killings,” said Sardesai. “But the opposition could well have crafted a winning narrative if it had not entered the race with a defeatist, demoralised mindset. The young India is looking for an altogether new alternative, a bit of which was the Kejriwal experiment five years ago. For now, I believe in next 20 years, a fresh option is bound to take shape,” he concluded.

The Bends in Their River- Rajendra Singh

No Regrets: Choices Women Must Make

Love Post Brangelina Does marriage have a sell by date

From Narasimha Rao to Narendra Modi 25 years of Swaminomics

Why India shifted rightwards India after 2019

Despots Then and Now From Stalin to Trump

Body Politics Should ‘we’ fit ‘their’ mould