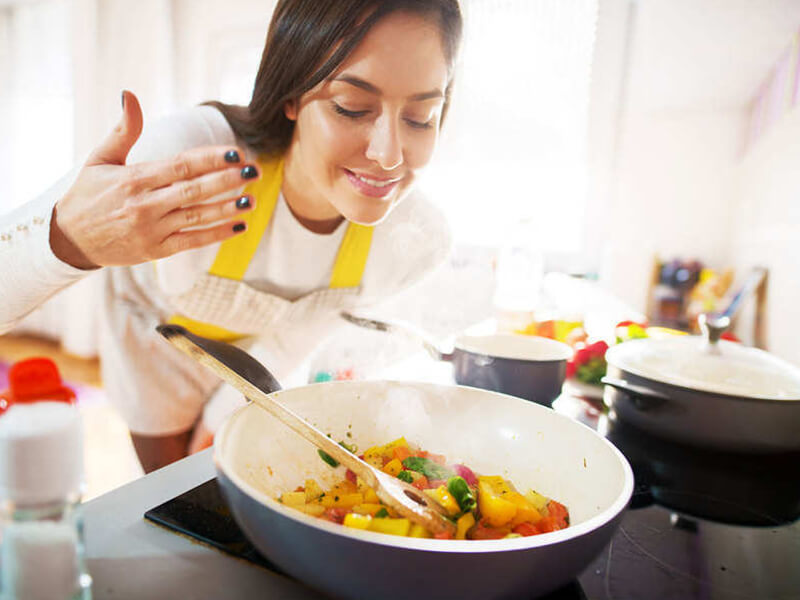 “Can you come over at noon to our place. There are these ladies who have come to pound the East Indian masala and I think that this will interest you.”

I needed no convincing once I saw this WhatsApp message from Aloo, as chef Aloysius Dsilva is fondly called, earlier this year in May and I immediately headed off to his house. Apart from being a very talented chef, Aloo belongs to the East Indian community of Mumbai. No, unlike what I thought when I first moved to Mumbai two decades back, East Indians are not my fellow Bengalis from the east of India! They refer to one of the original communities of Mumbai. They follow the Roman Catholic faith and were converted to it by the Portuguese. As Aloo wryly said, the community was given to the British as part of the dowry along with the islands of Mumbai when the marriage treaty of Charles II of England and Catherine of Braganza, the daughter of King John IV Portugal was drawn up on 21st May 1662.

From a culinary point of view, their food is an interesting confluence of their native Koli style of cooking and that of the Portuguese influenced style of cooking. It is similar and yet nuanced and different from the food of the Goan or the Mangalorean Catholics whose diet shows a Portuguese influence too. The bottle masala lies at the heart of the East Indian cooking. It is made with a mix of spices whose number can vary between 25 to 35 to even 40! Each house has its own mix. Each East Indian grandma has her own proportion for the same. Traditionally the bottle masala was made individually in each East Indian house spread across areas such as Bassein (Vasai), the original home of the community or Vandre (Bandra west) where many stay today. Aloo’s family had moved into Bandra from Vasai five generations back and they still live at the place where the original cottage lay, albeit in a slightly more modern building. The masala was to be made at their courtyard that afternoon by ladies from the Agri community of Mumbai who go from one east Indian house to another during the season to make the masala.

The unfortunate reality of today is that not all East Indian families make the masala at home. As families become smaller and houses more pigeonholed, this is no longer viable. Aloo’s is one of the places where the masala is still pounded fresh every year and then stored in coloured beer bottles (hence the name bottle masala) and I did not want to miss out on the experience.

I was in for a further treat as I discovered at his place later that afternoon. Aloo had decided to make a bevy of East Indian dishes, each showing different uses of the masala, for our lunch. Each dish was a treat but what I was particularly impressed by was a dish that he made by cooking tiny shrimp, seasonal white onions, semi ripe mangoes, rice congee or starch and the east Indian masala in a family heirloom cast iron wok on a coal fire.

I was so impressed by the dish, that I came home and made it for my wife and myself. I made a few substitutions of my own though. I used rawas (Indian salmon) fillets instead of the prawns and the more convenient modern gas hobs and pans instead of the coal fire oven and cast iron vessel. The bottle masala that Aloo gave me brought in the flavours from the makeshift kitchen in his backyard to my modern, tiny but smart kitchen, thereby adding a new chapter to our family menu.

When I chatted with my friends about this experience, I realised that I was not the only one to have introduced dishes, which one fell in love with at the house of someone belonging to a community different from one’s own, into one’s kitchen.

Inspired by the Bengali meals that she had eaten at her neighbour Moumita’s house, Bengaluru based food blogger, Nandita Iyer, herself a Tamilian, made the Bengali sheem paturi at home. She had used sheem (broad beans) grown in her own garden and loved how easy to cook the dish was. Mumbai based actress and food writer, Tara Deshpande, a Maharashtrian married to an American, picked up the recipe of a rogan josh from a Wazwan during a holiday in Kashmir. She came back to Mumbai and made both the Muslim and the Pandit versions pf the dish and marvelled at how light and healthy and yet flavour packed this rogan josh was compared to what she had eaten in restaurants in Mumbai before. Journalist, food researcher, passionate cook and a well-travelled Bengali, who currently shuttles between Gurugram and Mumbai, Pritha Sen, fondly remembered having a dish called chura methi saag (dry roasted and powdered methi) in her Maharashtrian colleague’s dabba at lunch time once and then coming home and making it for her own mother who loved the new addition to the fare at home.  Soumitra Velkar, a Pathare Prabhu from Mumbai and a financial services professional and weekend home chef, had a eureka moment when he had the Parsi lagan nu bhonu (wedding feast) treat jardaloo sali margi at his aunt’s house years back. His late uncle was Parsi and the prominent use of vinegar in the dish wowed young Soumitra as this was novel to him. Years later, he bought Kolah vinegar as well as Katy Dalal’s book on Parsi cooking and taught himself to make this this much to his family’s pleasure. Sanjukta Dutta, an entrepreneur and a food enthusiast, fell in love with the popular winter dish undhiyu at Ahmedabad when she stayed there years back. She got hold of the recipe and now makes it in her kitchen in Guwahati. Given the Assamese love for greens on their plate and the importance that they give to slow but simple cooking, I am not surprised that she took to undhiyu as the dishes hinges on just this. And since it is Christmas season, I must tell you about how food entrepreneur and author, Rushina Munshaw Ghildayal, had once encountered the Mangalorean Catholic Christmas delight Kuswar (Christmas sweets such as kulkul, gulios, rose cookies and macroons) at Karishma Pai, a blogger friend’s house, and now makes them for her friends during Christmas even though she is Gujarati herself.

The common strain through all these stories about how introducing flavours from another community made one’s kitchen richer and made one feel more connected too others different from one. The perfect recipe for a world built on the values of peaceful coexistence in my book.

I am sure that there are a billion more stories like this out there and I would love it if you go to www.timeskitchentales.com and share with us your story of cooking a dish from a land far away from yours. Tell us where did you come across the dish. What made you try making it at home? How was it received at home?

That’s all for now and here’s wishing a week full of great food ahead.