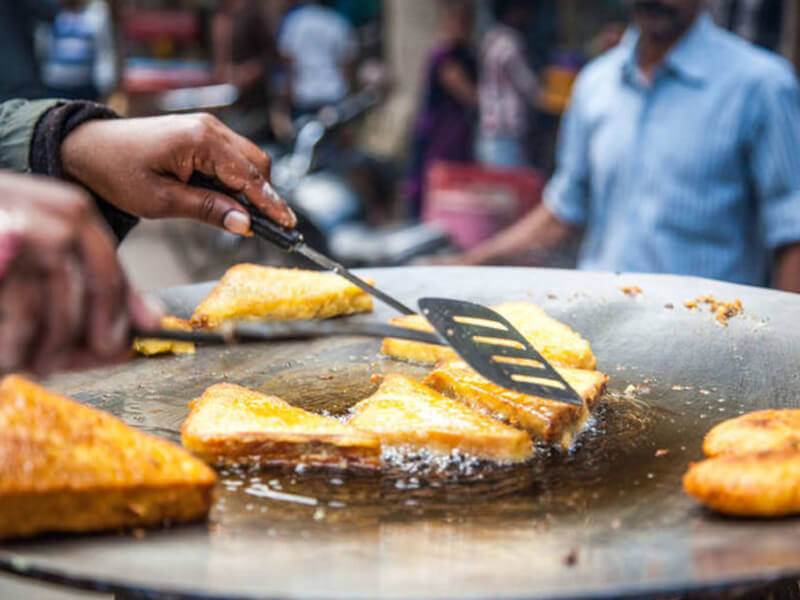 Teekha ya medium? Once the 62-year-old Hanumanji ascertains the spice levels you are comfortable with, he will take out his patila (saucepan) and add the ‘rogan’ – the oil that has floated up in the dal, simmered over a coal fire for over two hours by then. The dal consists of a mix of urad and moong. He adds some chilli powder, chopped chillies, ginger and garlic, fresh coriander leaves and spices, to the rogan. He portions out a serving of dal, adds it to the chilli oil that he has created out of the rogan and lets it cook in the patila. Hanumanji has been making this since 1970. His shop, located on the streets of Johari Bazar, Jaipur, was set up by his father even before Hanumanji was born. The name of the shop is Shri Ram Dal Fry.

Hanumanji believes that using his father’s patila for the final tadka (seasoning) has been lucky for him.

You cannot hurry Hanumanji. He knows exactly when your dal fry will be ready for you. This is not like the peyaz ki kachori, alu and mirchi vada in the shop beside his… those are for immediate consumption, fun, and leisure. This is serious business.

What Hanumanji dishes out is food that sustains you. His customers know that, which is why they queue up and wait. Once Hanumanji has decided that the dal fry, which was destined for you is ready, he will pour it out onto a small stainless steel bowl – filled to the brim and a bit more. He does not believe in half measures.

The boys making chapatis in the small tandoor oven placed beside him will quickly rustle up chapatis, apply a brush of ghee to them and get it for you. To make the meal complete, you can order a papad chudi too, i.e., papad roasted, smashed, mixed with finely-chopped raw red onions, green chillies, tomatoes and coriander. Once you break a piece of the roti, scoop some dal with it and put it in your mouth. You will smile. Your heart has got the answer it sought.

Shri Ram Dal Fry is one of the numerous restaurants dotting Jaipur with the words ‘pavitra bhojanalaya’ appended to them. Food fit for the gods. Locals will be able to sniff out the good ones for you. In this case, it was thanks to young chef and Jaipur food ambassador, Vinayak Agrawal, and Anubhav Sapra, who runs the Delhi Food Walks, that I found this place.

Hanumanji proudly told me that his sons are preparing the floor above his to make a sit-down restaurant. Matar paneer, dum aloo and a lot more will be sold there. The simple dal fry and roti place of the first two generations might soon become a thing of the past.

That is the thing about such street food stalwarts, who have fuelled our nation over the years. Their skills are sublime. They work very hard. Their heirs have led a better life than them, and have higher aspirations. They may not want to follow in their parent’s footsteps… which is why we need to treasure such places while they last. Much as we would wish for the Hanumanjis of the world to be immortal.

Do write in at www.timeskitchentales with the story of people who run street food joints that are local favourites, even if they aren’t well known. We would love to share these stories. The older the shop, the better.

View of Jaipur from Nahargarh Fort; Right: Hanumanji has been making a special dal fry since 1970. His shop, located on the streets of Johari Bazar, Jaipur, was set up by his father even before Hanumanji was born; Far right: Dal fry, roti and papad chudi

How can you be a part of this? Keep a lookout for this space – where we will introduce fresh topics of discussion every week. Find us at: www.timeskitchentales.com and share your stories. The most inspiring stories from the repository of ‘Times Kitchen Tales’ will be shared in this column.