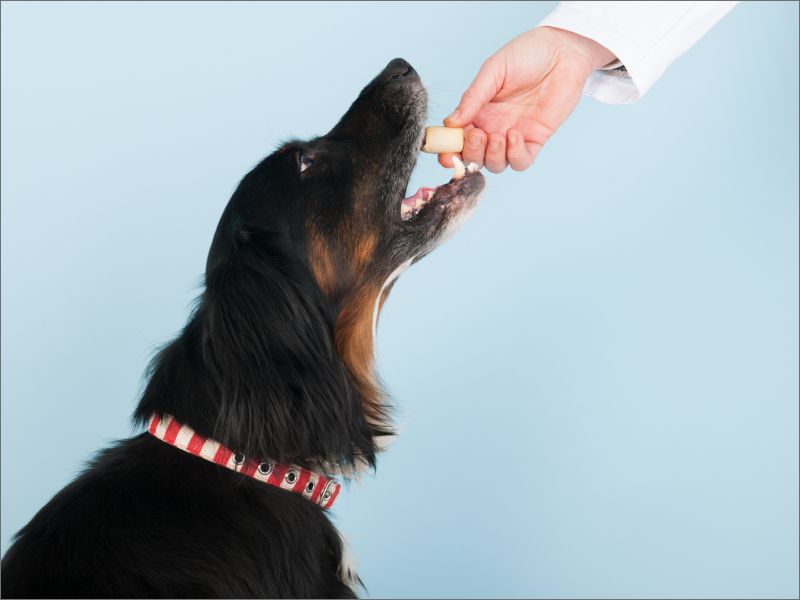 Training plays a crucial role to ensure a happy and successful relationship between you and your pet.  Puppy hood is the crucial period during which the foundations for a happy, well-behaved pet are laid down using well-structured training schedule. Any training method that you choose, should be based on the principle of Positive Reinforcement which means rewarding your puppy’s right actions.

How do Dog’s Learn:

Before you start training, here are a few pointers:

It may take weeks of practice until your dog has mastered your commands. It’s important not to expect too much of him too soon. Remember, dogs are not used to human speech, so if you think he’s not understood, keep trying.

Different Commands to Teach Your Pup

Train your puppy for a sitting posture using treat to lure him to sit down. When the puppy is in standing posture, hold a treat just infront of his nose, then slowly raise the treat up & above his head. The puppy should follow the treat with his nose & push his head back as he follows the treat. This would result in putting his bottom on ground and sitting down. Puppy should be immediately raised by praise & treat as soon as he sits down. Repeat this activity several times till the pup understand what to do. The pup will eventually learn to sit when he sees the treat over his head & the word “sit” will be associated with treat.

Puppy can be trained to lie down by holding a piece of treat infront of his nose while he is sitting down and slowly lowering the treat & placing the hand between his legs, this would lure him to lie down. As soon as the puppy lies down, reward him by praising & giving him a treat. This is a good position for preventing your dog getting into trouble, especially when other dogs come along.

Recall is an important lesson that puppy should learn at an early age, start in a controlled space such as indoor or inside a garden with no distractions. Use the same recall command & practice by calling out your pups name and whenever he comes when you call him, praise him. Once he learns, add the recall command along with his name. Once you are confident that your pup has learnt recall, try the activity in a park.

Puppy should be introduced to wear a collar as soon as he comes home and taught to walk on a leash. Try a collar that fits your puppy appropriately, you should be able to pass 2 fingers through the collar. Adjust or replace the collar as the puppy grows.

Puppies can trained by using a crate, but ensure that the crate is comfortable & spacy for the pup. Use a crate in which the puppy can easily move around, lie with his legs stretched and sit comfortably. Try feeding the puppy inside the crate so that he associates crate with good experience. Never leave the puppy in the crate for a long period.

Puppy needs to make several visits outside to relieve himself at the right spot. Every time the pup goes to toilet at the right place reward him with a lot of praise and never punish or scold your pup if he has accidents. Clean the pup as without making much fuss about it. Avoid accidents by frequently taking him outside- after every meal, waking up from sleep, first thing in the morning, before going to bed, after play etc.

Single children and their pets- Having a best friend at home

Why dogs lick – slurps of our furry friends

How to take care of your pets in winters?

How to help a stray dog? By Swati Tandon

How to chose the right vet for your pet?

How To Stop Resource Guarding In Dogs- Larry