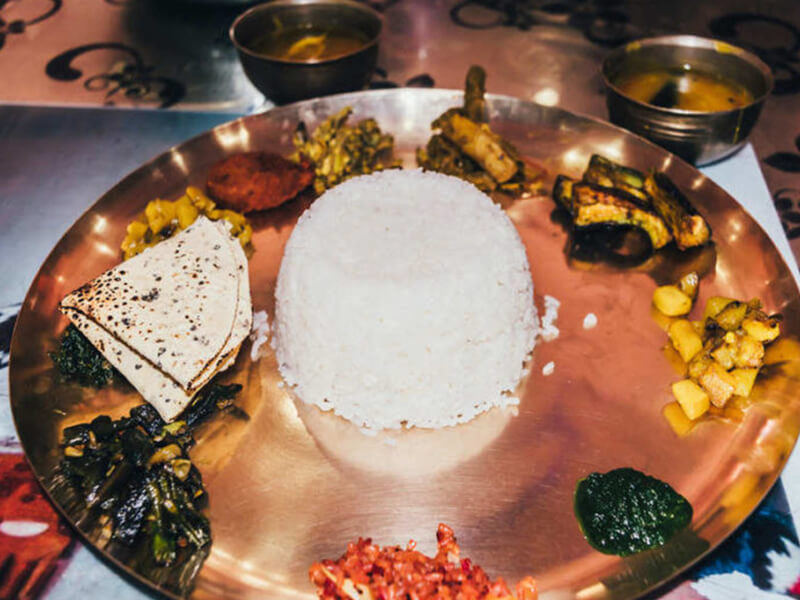 The paniphal pulao from the Sheherwali cuisine of Bengal is a dish that baffled me at first glance when I had it in Kolkata recently. It looked similar to the biryanis of Lucknow – long- grained basmati rice, white in colour, interspersed with streaks of saffron… pieces of what could very well be bits of boneless chicken, peeping through it. Yet, the dish is not only vegetarian, it is made sans onion and garlic! The polar opposite of what one would expect in a good Awadhi biryani.

The little known Sheherwali cuisine of Bengal is a confluence of three diverse traditions, says chef Varun Mohan. The Sheherwalis are originally Oswal Jains from Rajasthan, who moved to Murshidabad in the 18th century in search of trade. This onion, garlic and root vegetable-eschewing vegetarian Jain community, then took inspiration from the kitchens of their new neighbours. From the Bengalis, they learnt to make use of the green vegetation around which was scarce in Rajasthan.

Spices such as panch phoron mix and mustard oil were added too. From the courts of the Muslim nawabs of Murshidabad, they adopted ingredients such as kesar (saffron), kevra jal, dried fruits and nuts, and hung curd. Ingredients (and the dum style of cooking), had their origin in Persia. Paniphal (fresh water chestnut), found in abundance in Bengal, was added to the pulao to complete the Nawabi feel. In keeping with the culinary traditions of Rajasthan, the pulao is rather masaledar (spicy).

Other examples of such synthesis in Sheherwali cuisine include kesar kheer, the simple rice-and-milk-based sweet dish from Rajasthan, embellished with saffron and dry fruits as learnt from the nawabs. Then there was kheere ke kachori, where the traditional Rajasthani kachori is stuffed with a mix of shredded cucumber, dried and cooked and blended with hung curd, to create a hedonistic mix.

The more I learnt about the cuisines of the Sheherwalis — named so because they had made the then nawabi sheher (big city) of Murshidabad their home — the more I was in awe of them. Here was an immigrant community that embraced the culinary heritage of those different from them, rather than looking at life rigidly without refusing to change.

“That is how Indian cuisine has grown over the years. We keep moving and evolving as we come across new experiences, as does our food,” says Mohan.

This is the spirit we need to carry ahead – to open our minds and engage in dialogues with those different from us and embellish our kitchens and our lives in the process. Are there examples of dishes in your community, that are a result of inspirations taken from other communities?

How can you be a part of this?
Keep a lookout for this space – where we will introduce fresh topics of discussion every week. Find us at: www.timeskitchentales.com and share your stories. The most inspiring stories from the repository of ‘Times Kitchen Tales’ will be shared in this column.